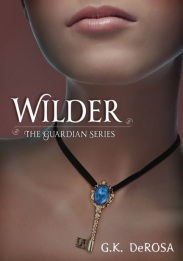 What are the titles of your work and can you tell us a bit about them?
I have one book series out called Wilder: The Guardian Series – there are 4 books in the series plus a companion novella. The story is about a young girl in her senior year of high school who discovers a huge family secret after a pair of handsome brothers move into her small town.

Who’s your favorite character from your books?
I really love my main character, Celeste Wilder. I wanted to have a strong female heroine as the lead and I think she embodies that. Sure she’s silly and naïve sometimes, she is only 17 after all, but she’s also strong and resilient and can kick some butt!

Your series is a great vampire tale. Is there a reason you chose to write about these supernatural creatures?
Who doesn’t love a good vampire story right? I know it’s been done a lot with Twilight, The Vampire Diaries, True Blood etc. but there’s a reason why we all keep coming back for more! There’s something so thrilling about the idea of eternal love and then of course there’s the whole bad boy thing. So that’s why J

Whenever a story has a human falling in love with someone who isn’t so human, there are complications – sometimes insurmountable ones. Some books such as Twilight or the Vampire Diaries solve this by simply turning their human into a vampire. You didn’t take such an easy route. How did you deal with these types of issues?
It’s true, it is a difficult challenge but from the moment I started the first book, I knew what I wanted to do with that. I don’t want to give away too much but that’s the beauty about writing YA fantasy, you aren’t constrained to anything. If you can think of a way to deal with a problem and explain it somewhat logically or “realistically”, you can accomplish anything you want in the story telling.

You’ve chosen not to have a singular supernatural focus in your books. Along with vampires, you have werewolves, witches, fairies, and of course – the guardians. How did you keep all of this straight as you were writing it?
As you mentioned, there are so many vampire stories out there and I didn’t want Wilder to be just another vampire book. I think adding other supernatural creatures and mystical elements makes for a more interesting story. This way the characters all have their unique powers they bring into the mix.

Were there alternate endings that you considered?
Yes there definitely were a few different options I toyed with regarding Aleks and Lilliana. Again I don’t want to give away too much, but after you read it, if you want to know, shoot me an email and I’ll be happy to tell you the alternate endings I had in mind. As for Celeste, Roman and Nico I knew from the beginning how I wanted it all to end.

What authors have inspired you to write?
I’m obviously a big fan of YA myself and have read a ton of it! I loved the Hunger Games by Suzanne Collins and read the series about 4 times already. Then there are authors like Stephenie Meyer and LJ Smith who wrote Twilight and The Vampire Diaries. They inspired me in a different way – no offense to their writing, but after reading their series it made me think I could totally do this!

What age were you when you started writing?
Honestly, I loved writing when I was back in grade school and middle school but then I totally lost track of it. It wasn’t until I was in my early 30’s that I picked it up again. Wilder was the first novel I wrote and published.

Do you ever experience writer’s block?
Sure, I think it’s impossible not to, but it happens pretty rarely luckily! I have a very active imagination and love conjuring up the different scenes in my head.

Do you work with an outline, or just write?
For my first book, Wilder, I just wrote. I really had no idea what I was doing to be honest! I got more organized after that and you can probably tell if you’ve read the whole series! Even by my last book Wilder Legacy, I still didn’t do a very detailed outline. I like my characters to dictate where the story goes.

Do you ever get sad when you realize that the characters that you’ve created aren’t real?
Yes! I was so depressed when I wrote the last book in the series because I couldn’t believe that I wasn’t going to be able to spend time with my characters anymore. You definitely get attached and they become like real people to you.

Can you tell us about your challenges in getting your first book published?
I decided to self-publish from the get go so I never went through the thrill of rejection from publishers 😉 But I also had no idea what I was doing in self-publishing. I thought writing the book was going to be the hard part, but I was totally wrong. From finding an editor to a graphic designer to formatting and not to mention the all-important marketing, there were so many things to do. But it was totally worth it and I’m so glad that I did it on my own.

If you had to go back and do it all over, is there any aspect of your novel or getting it published that you would change?
Not really… except I wish I had known more about marketing and advertising from the beginning. That would have been extremely helpful!

Can you tell us about your upcoming book?
Wilder is currently included in Dark Legends which is a collection of urban fantasy/paranormal romance novels with 20 other amazing authors. That has been a huge project that has been quite time consuming lately. I am going to start working on a spin-off of Wilder that I’ve had in mind since I started on the last book. This is actually the first time I’m really talking about it, but it will feature some of everyone’s favorite characters in Oak Bluffs. I’ll give you a little teaser – a hot younger Constantin brother will be one of the stars J But… the main character will again be a female and I think you’re really going to love her.

What has been the toughest criticism given to you as an author? What has been the best compliment?
Oh man, I had one review on Goodreads that was like 10 paragraphs long and she went through and quoted several lines from Wilder and tore it apart. Her criticism ranged from punctuation to dialog to overall plot. She was brutal! Mind you, this person was given the book for free for review! I’m really lucky that I get a lot of great reviews from my fans and they leave lots of wonderful comments on my website. I absolutely love hearing from them. One of my favorites, is this lovely lady who said she could totally see Wilder as a TV show on the CW! She’s an awesome supporter!

Do you have any advice to give to aspiring writers?
As Nike says, Just do it! As daunting as it may seem, writing and publishing your novel is incredibly rewarding, not to mention fun! I never thought I could make a career out of something that I enjoy doing so much. Never give up and no matter how scary it is, put your book out there and let people read it. It’s totally worth it!

What others are saying about G.K. Derosa:

“This story has layers upon layers of things happening that all somehow are interconnected. It’s like a bunch of story-lines melded into on in an exciting fashion. Ms. Derosa has once again impressed me, entertained me, and made me want more. She can count me as a fan.”

“With twist and turns, and a new take on vampires, along with likable characters you root for from the very beginning, I found myself drawn into this world so immensely, that I read the entire thing in one day.”