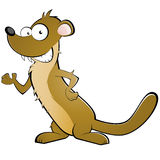 (A Flash fiction from the world of P.A.W.S.)

“Popgoes! Hey, Popgoes! Come back here! Where is that weasel?”

The Great Bobbert scratched his head unleashing a cascade of bluish purple powder from his long straggly orange hair. His many pockets bulged with a multitude of objects: cards, rings, whistles, coins, scarves, and balloons – all the tricks of the trade for a working clown.

He rushed through the park, puffing and panting, accidentally kicking a squirrel in his path that chattered angrily at him.

“No need for that kind of language,” muttered the clown.

“Now, where is that pesky weasel? Ah, there he is. What the . . . ? Is that a kangaroo? Where did it come from? They’re certainly not indigenous to Missouri, or at least I don’t think they are. Did it escape from the zoo? I wonder if there’s a reward?”

Clowning no longer was as lucrative as it used to be, especially as weasel food had become so expensive of late, so Bobbert was always looking for a way to supplement his income.

“Maybe if it’s not from the zoo, we can use it in the act? Maybe Popgoes is arranging a contract. Good weasel – they’ll be extra Purina Weasel Treats for you tonight.”

Cautiously the clown moved forward. “I wonder if it’s fierce. It doesn’t look fierce, but you never know. Appearances can be deceptive. Look at Popgoes. Everyone thinks he’s so cute, but he’s a devious little bugger with a nasty bite!”

“Popgoes, come here!”  The weasel looked up at the clown and then leaned towards the kangaroo as if sharing a joke or a secret.

Without warning, the kangaroo bolted out of the path. Bobbert pounced and grabbed his weasel before it followed. “No, you don’t,” he said, and returned the struggling Popgoes to the felt hat on the top of his orange thatch. Resigned the weasel sat there surveying the world around him.

“Now, let’s go see what happened to that kangaroo.” He scoured the park looking for the wayward critter. He saw squirrels and rabbits galore, and plenty of locals walking their dogs. He asked a couple if they’d seen a kangaroo, but they looked at him as if he was crazy.

Finally, winded and dejected, he sat down on a bench next to a boy with dark messy hair. He looked vaguely familiar.

“Hey Kid, have you seen a kangaroo, around here?”

“No mate!” the boy said smiling. “Now, why would there be a kangaroo in the park?”

“Joey!” a voice called from the other side of the path.

“Gotta go!” said the boy, and bounded off, but for just a second it looked to Bobbert that he morphed into a small brown kangaroo.

“I must have drunk too much schnapps,” said Bobbert, shaking his head. “Come on Popgoes, let’s go home.”