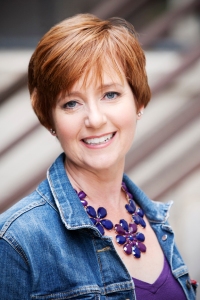 Once upon a time, Tracy Lawson was a little girl with a big imagination who was obsessed with telling stories. Her interests in dance, theatre, and other forms of make-believe led to a twenty-year career in the performing arts, where “work” meant she got to do things like tap dance and choreograph musicals.

Though teaching dance and choreographing shows was a great outlet for her creativity, Tracy never lost her desire to write. The Cincinnati native now has to her credit an award-winning nonfiction history book, Fips, Bots, Doggeries, and More(McDonald & Woodward, 2012), based on a travel journal written by her great-great-great grandfather.

Fips and Bots was soon followed by Counteract (2014) and Resist (2015), the first two installments in the young adult dystopian Resistance Series.

Ignite, the third book in the Resistance Series, is slated for release in summer 2016, with Revolt, the final book in the series, to follow in 2017. Pride of the Valley, a companion volume to Fips, Bots, Doggeries, and More, is also in the pipeline for 2017.

Tracy, who is married with one college-aged daughter and three spoiled cats, splits her time between Dallas, Texas and Columbus, Ohio.