For sixteen-year-old Charlotte Flynn, moving into the heart of the Michigan woods with her family is the biggest adventure she’s ever had. A self-proclaimed geek girl with a penchant for Sherlock Holmes, she wonders if she’ll ever have an exciting quest of her own.

But when she discovers an antique carousel tucked into the woods near her new home, her life soon spins out of control. For the ponies are so much more than their faded paint portrays. Filled with primal magic, the ponies are alive, and they have been waiting for her for a long time.

With the help of a young carousel caretaker named Black, Charlotte soon discovers that the Flying Ponies are in danger from others who want to possess them and their magic. Drawn into a battle for the carousel and ultimately the entire world while navigating her first true romance, Charlotte may have more adventure than she ever bargained for . . 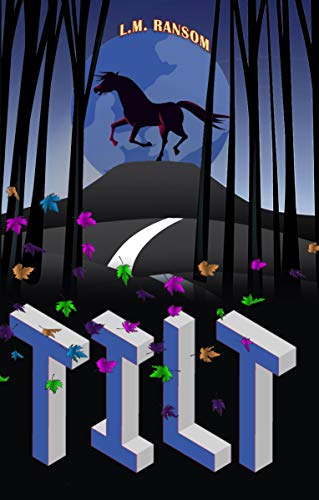 Charlotte Flynn is on a mission. Betrayed by both Penumbra and her Uncle Baron, Charlotte is seeking the missing Flying Ponies in the hopes of uniting them against their wayward leader. Joined by Dreadful, a crazy cavalry horse; Black, her new boyfriend; and her family and friends, she plans to find the missing carousel horses before Penumbra and Baron do.But the hunt won’t be easy. An old friend of Black’s shows up, with intentions that might not be as honorable as she says. The Tyranny holds some of the Flying Ponies in their possession – and they’re not giving them up. Penumbra, determined to have all the carousel horses to himself, will stop at nothing to defeat Charlotte and Dreadful.And if that isn’t enough, Charlotte discovers she, like her traitorous uncle, has magic flowing through her. Determined to bring the Flying Ponies back together no matter the cost, the sixteen-year-old may end up paying the ultimate price.

Michael Hilton was six years old when he fell into an unexplained coma. His mysterious powers emerged when he inexplicably awoke, forever changed. Unearthly creatures that once were hidden from view were no longer invisible to him. Like the creatures living incognito amongst the human race, so will Michael attempt to conceal from others his strange powers and abilities. But his ability to see creatures prowling in his world is just the tip of the iceberg.

Michael is compelled to return to protect Avery. In addition to known threats, there are new creatures terrorizing her. He is dismayed that Greyson is still involved and he is frustrated by Dean, a feisty competitor for her affections. When an entity with painful echoes appears, Michael realizes that Villefuries, Kritch, and the peculiar fog, are somehow inextricably intertwined. The furtive girl with the rainbow coloured hair attempts to intercede, but it isn’t just Avery who needs protection. Oh, and to Michael’s consternation, his cat Henry continues to wreak havoc.

Through an apparition, Michael learns that Avery has a powerful secret, one that even she has yet to learn. He begins to grasp why the creatures are swarming around the University. Michael becomes confused over Kritch’s true intentions when he witnesses a fearsome altercation between her and the creatures. When dreadful echoes warn of danger, Greyson, Avery and Michael must devise a strategy to protect themselves. Even with their combined powers, will they be able to thwart the evil entities’ plan to seize Avery?

Check out other books in the Pria Chronicles Series!

Rise of the Shadow Seekers: The First Seeker
by Korey Ward

With a flash of light, and a crack of thunder, Alex’s world is changed forever. With the aid of his friends, and an old spyglass that can reveal the things that lurk in the shadows, he will discover an ancient threat growing within the town of Sundown, and possibly the world. What will he discover the shadows? Will he stop the spreading curse before it’s too late?
Find out in Rise of the Shadow Seekers, The First Seeker

Purchase Rise of the Shadow Seekers: The First Seeker on Amazon:
E-book:
Paperback

Ever dreamed of having control over an element? Ava Sparks didn’t. She was just a normal girl without a passing thought that there could be something out there other than humans. Until her seventeenth birthday.

In a moment of panic, something unthinkable happens: lightning surged out of her hands. Soon after, she is swept away into the world of elementals. At Westville Boarding School, she is drawn into a society full of dark secrets, power, and rivalry, and she must find her place in the battle Ms. Masters, the leader of the elementals, is set on instigating against humans.

Aided by her best friend Harper McGee, she realizes her true potential and the benefits of wielding lightning. However, reoccurring nightmares are testing the limits of her sanity and the fact that an unavoidable darkness follows the lightning doesn’t help. When the past and present starts to collide, secrets are revealed and fate is hard to avoid. Throw in the infuriating, but mouth-watering, Nathan Yates and life is no longer easy. She instantly feels drawn to him, no matter how rude he is or how hard he pushes her away.

Kyler Yates has grown up in the elemental society all her life. Her mother, an advocate for human relations, wants her to start attending a human school for her last year. Kyler, unlike her mom, wants nothing to do with humans so why would she try to be friends with them?

Remy James grew up in the human world and has been taught that elementals are terrible, selfish people. It’s only proven true when he meets Kyler. She’s condescending and cold-hearted, but there’s something there that makes Remy want to get to know her.

Can the two of them get over their differences and give in to the pull that keeps drawing them together?