What a great batch of books to close out the summer season!

8/7 – Heart of Destiny: Book One of The Heart of the Citadel
by Susan Faw

Magic suppressed. Magic exiled. Magic murdered. During the Great Purge, all magic was destroyed and those who could wield it were driven into exile. From that time on, the world of Gaia churned on in relative peace and prosperity.

When the emperor of the central Citadel suddenly dies, his apprentice takes his place. Benevolent and loved, the new emperor is a benign ruler, bridging the age-old conflicts between the provinces. The citadel is a symbolic as well as a physical barrier to maintaining the fragile peace. However, the brazen kidnapping of ten young women shatters the accord, and the councillors of the provinces gather at the Citadel to demand that justice be served. It is a flame dropped into dry tinder. Rife with suspicion and hatred, each province accuses its neighbour of treachery. But the emperor has other plans. He alone knows who is responsible for the kidnapping of the young women, and he has no intention of sharing that knowledge. Where magic is involved, there can only be one conqueror. The fight for ultimate control of magic has begun.

Only magic can save them from what is coming, but first, it must be reclaimed. Twenty years ago, war devastated Dreach. Bloody and cruel, it ravaged the realm and stripped magic from Dreach-Sciene. Without magic, there is no hope. No life. For Prince Trystan Renauld, there is no choice. As his people starve, his enemy prepares for a final showdown that will decide the fate of the realm. Without magical power, he and his people will lose everything. Even with it, they may fail. Against a backdrop of prophecy, curses, and forbidden love, Trystan must reunite the legendary Tri-Gard, keepers of the magic, and find the power he’s always believed was a fairy tale: magic, the very foundation of life. With both sides preparing for battle, it’s a race against time—and against the kind of darkness that can destroy them all. Prophecy of Darkness is an epic adventure to destroy evil. Do you dare to join the Prince and the people of Dreach-Sciene to fight the darkness before everything is lost? Will you help the Princess prove she is more than they think she is? Are you ready to fall in love?

What if you could foresee death?

Mirela can prophesy the death of whomever she sees. At thirteen, Ela foretold the death of her best friend, only to watch it happen before her very eyes. Ela, now twenty-one, spends her days locked away in her apartment, avoiding the public and the gift she considers a curse.
Until he appears.
Luka Conway is handsome. Charming. And magical. After Ela predicts yet another death, Luka leads her to an underground city hidden beneath Atlanta, populated by empaths, telepaths, and seers. Luka is a Shade, a soldier fighting a secret war against the Wraiths, a deadly group of sorcerers who wish to take over the world. Ela is given no choice; she must prove herself a Shade, and use her powers for the light, or she will be put to death. Resolved to her fate, Ela trains as a warrior, determined to put her curse to good use.
Then Talon Michaels appears. He’s just as dashing as Luka, and even more dangerous. A Wraith, Talon warns Ela that the Shades aren’t all what they appear. Who can Ela trust, if anyone? Should her powers be used for good…or evil? Which should she choose? 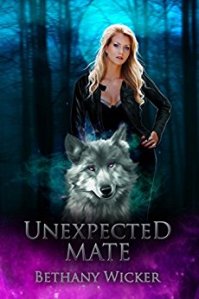 Eden was born a hybrid wolf with both Alpha and Luna powers within her. Now that she’s seventeen, she’s expected to find a mate and prepare to take over her pack when she’s eighteen, as is tradition. But nobody expected it to be Liam.

Liam, the son of Knox and Katie, is the only werewolf born without a wolf. It was an unheard of phenomena until he was born. His twin brother got the wolf gene and Liam is just the leftover. Feeling like an outcast, he never anticipated he’d have a shot at dating Eden, let alone be her mate.

Does Eden have enough werewolf in her for the two of them to lead the pack together? To make things worse, something’s draining their livestock of their blood. 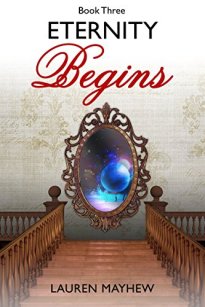 Liliana Frye is a Custos – an immortal being with superhuman powers. It’s a life that many would love to have, and yet Liliana’s hasn’t been easy. Her powers are greatly desired by Duana, a Custos whose main aim is to steal as many powers as she can to become the greatest of all.

The Book of Custos contains the information that Duana needs to take the powers, but she doesn’t have it. Liliana’s family have the book. Duana has Liliana, along with hundreds of Custos in her crystal ball prisons. It’s only a matter of time before she figures out the ritual, and puts everyone’s lives in danger.

The action-packed final book in the Liliana Trilogy will keep you hooked until the very last page.

Dying was only the beginning of Aria’s problems.

Now she must overcome the dark urges growing inside her and curb her insatiable appetite. Unfortunately, the one person who can help Aria is the one who betrayed her. Forgiving him might be the only way to get a grip on her wicked impulses.

On top of powerful volatile abilities, a slew of enemies have emerged. Aria’s new powers seem more like a curse, sparking fear and jealousy and marking a giant supernatural target on her back.

With merciless enemies closing in on Aria, one thing’s for sure—she needs to get a handle on her powers, and fast, before someone kills her for real this time. 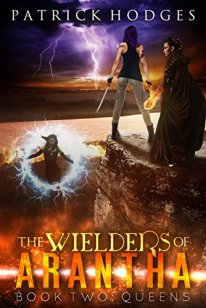 A cosmic game of chess is underway, and the planet Elystra is the board.

Earth pilot Maeve and her son Davin have joined the Ixtrayu, hoping to avert the destruction that their leader, Kelia, has foretold. But will Maeve’s burgeoning Wielding powers be enough to thwart the machinations of Elzor and his lightning-wielding sister, Elzaria, before everything the Ixtrayu have ever known is destroyed in Elzor’s quest for ultimate power?

Queens is Part Two in the Wielders of Arantha trilogy. If you love science fiction or fantasy, then this series will thrill and enthrall you!

Kai, the newly-crowned queen of Miina, finds her reign threatened by a plague of natural disasters that leave death and destruction in their wake. Are the gods truly angry at the peace between the moon and sunburners, or is something more sinister to blame? Kai’s throne and her very life may be forfeit unless she can appease the gods’ anger and her peoples’ superstitions.

Determined to find a solution, Kai and the Sunburner Prince Hiro embark on an extraordinary and dangerous journey to discover the true cause of the plagues. What they find is an ancient enemy determined to plunge their world into eternal darkness — and one desperate chance to save it.

Sunburner, the sequel to Moonburner, is a young adult fantasy that will appeal to fans of Sabaa Tahir, Sarah J. Maas, and Leigh Bardugo.

For Eila Walker, a New Bedford night club with questionable morals may be her only safe point in the brewing war between her crew and drug-dealer Lawson Waite.

After managing to wrangle a deal with club maven Maia Moriarty, Eila begins to believe that FAUST may actually work as a solid safe house until she and her friends can figure out how best to track down Waite.

But brutality comes quickly to Faust. In the aftermath, a shocking truth about Lawson Waite is whispered during a death-bed confession on the roof of the decadent club.
The warning is simple: Lawson Waite is no mere man.

Now desperate to kill Waite and stop his time-altering Gabriel Gate, Eila and her crew push the limits of all their abilities in an attempt to finish what Elizabeth started so long ago.

Told through the eyes of three characters,
MJ, the shifter,
Eila, the Lunaterra, and
Raef, the soul thief,
Last Light is one wild ride into the heart of what
makes us human and what lies history has told.

Follow YA Author Rendezvous on WordPress.com
Join 163 other subscribers