The Fate of Ten – Pittacus Lore 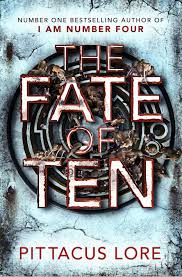 The Fate of Ten – Pittacus Lore – 5 Stars, by Lauren Mayhew

Blurb: For years the Garde have fought the Mogadorians in secret. Now all of that has changed. The invasion has begun. If the Garde can’t find a way to stop the Mogs, humanity will suffer the same fate as the Lorien: annihilation.

There is still hope. When the Elders sent the Garde to Earth, they had a plan-one which the Garde are finally starting to understand. In the climax of The Revenge of Seven, a group of the Garde traveled to an ancient pyramid in Mexico known to their people as the Sanctuary. There they awoke a power that had been hidden within our planet for generations. Now this power can save the world . . . or destroy it. It will all depend on who wields it.

I cannot even begin to explain how much I love these books! As far as I can remember, I have been reading them since the first one – I am Number Four – came out, so I’ve had a lot of patient waiting to do. And guess what… It’s still not finished!

I don’t mind there being another book because I’m really not keen for this series to be over, I just can’t believe the cliffhanger that it ended on.

I think I was supposed to be a bit more upset than I was at the ending of this book, but the character that we say goodbye to just seemed to be a bit of a spare part to me. I’m more worried about the impact this is going to have on a certain other character that I love!

This book was action packed from page 1. This one didn’t swap between too many different characters either, it was only John, Six and Ella occasionally. It made it a lot easier to read because I wasn’t having to try and remember which font applied to which character! The previous books had a habit of doing this and it got really confusing.

I think the whole book takes place in about 48 hours or so and a LOT happens in that time. I really don’t want to give too much away with this one, unlike some of my other reviews.

I’m loving the development of humans getting Legacies, though I do see this backfiring at some point. Maybe I’m too sceptical.

It was interesting to see some of the back story of Setrakus Ra. And one of my favourite lines during this sequence came from Six to the big bad himself – I would write it here, but it’s a little bit rude!

Ella really grows as a character in this one and I love her to pieces. There was a heart stopping moment involving her in this one. I’m not even joking, if Ella doesn’t make it, I will not be happy. Same goes for Sam, Marina and John. Six too. And Nine. Basically, no more Garde are allowed to die – apart from Five. I still haven’t quite figured him out.

I’m eagerly awaiting book 7. Hopefully it doesn’t take longer than a year.. This is definitely going onto my all time favourite books list.

YA Book Reviews, YA Readers

One thought on “The Fate of Ten – Pittacus Lore”