Several great books to tell you about this month! 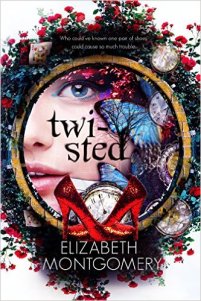 Who could’ve known one pair of shoes could cause so much trouble.

Dee’s lost the sparkly red heels, and when she befriends a witch to help her find a way home, she finds herself down the rabbit hole. With the veil between Wonderland and Oz torn wide open, things go awry.

The flying monkeys are loose in the Kingdom, Hatter is lost on the sun-colored brick road, and betwixt a battle of the worlds, the Red Queen seeks power, but all Dee wants is to go home.

Link to the Book on Amazon HERE

Steve was destined to be a hero. Or maybe he wasn’t. To be honest, he wasn’t sure anymore. But since the monsters won’t stop spawning and attacking his village, he finds himself forced into the role. Along with his friends, his dog, and an impossibly red dragon, he is determined to bring peace to all block-kind.

Cats and Wolves and Tegs – Oh my!
Meet Alistair, Ramora and Griddlebone in three stories from the world of P.A.W.S.

It’s been a week since 17-year-old Zoe Jabril found out her best friend is a Guardian Angel, her boyfriend is a Nephilim, and a fellow classmate is a Fairy. What makes Zoe so special? She’s destined to unify Enlightens to battle evil—that is, if Demons don’t kill her first.
​
With “Project: Enlightens Unite” underway, Zoe learns the history of the area wolf pack and realizes she’s in a race against time to get her newly discovered talents under control. Despite struggling to fight a mysterious attraction to her new neighbor, rescue her boyfriend from Demons, and travel into Fairyland to convince the Summer King to join the fight, Zoe must still attend high school classes so her nosy parents don’t suspect anything is out of the ordinary before Demons can mount another attack.

Zoe will need all the help she can get, from the most unlikely of sources, if she’s to save her boyfriend’s life and prevent the Devil from escaping Hell on her eighteenth birthday.

Having managed to free herself from Duana’s prison, Liliana Frye still needs to find her family. Samson, her brother, her fiancée Asher and best friend Justin have waited 174 years to see her again, but she still doesn’t know exactly where they are.

A letter from her father reveals secrets about Liliana that will undoubtedly change her world. She begins to realise why Duana so desperately wants to steal her powers and is determined to never let her complete her aim to become the most powerful Custos the world has ever seen.

New friends are made, old friends return and Liliana needs to decide who she can trust.

One thought on “April – New Releases”